I love a challenge, and this month Aurifil challenged it’s artisans to create a whole cloth mini quilt using a Paintbrush Studios Painter’s Palette Solid and a coordinating thread in our choice of weight.  I was sent Midnight blue fabric and a matching thread.  This first photo has the most accurate color so imagine that color when you see all of the indoor photos! 🤣 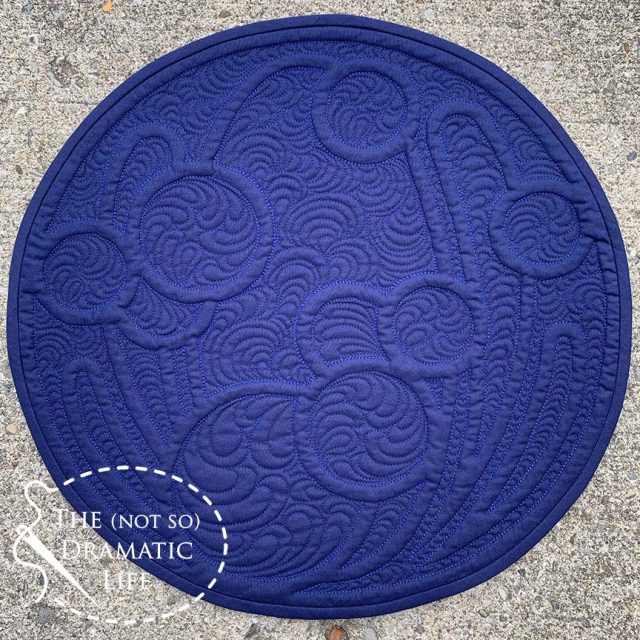 Whole cloth quilting isn’t something I do very often, so I decided to start the process with a little research.  Quilting tends to rely on pattern and repetition, so the books I pulled out had lots of art that embraces those principles.  I was also leaning toward 20th century art for inspiration, but I include some inspiration from earlier eras, just in case something caught my eye. 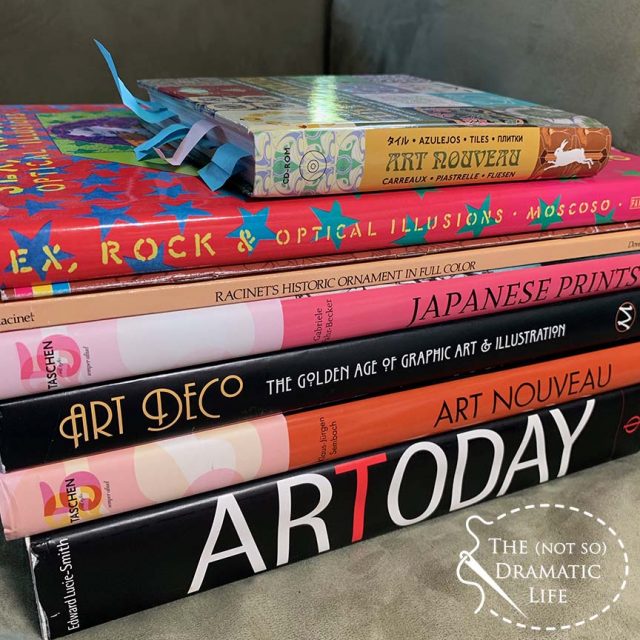 Ultimately I landed on these two Art Nouveau tile images to use for design inspiration.  I liked the circular quality of both designs, and thought that they would combine well. 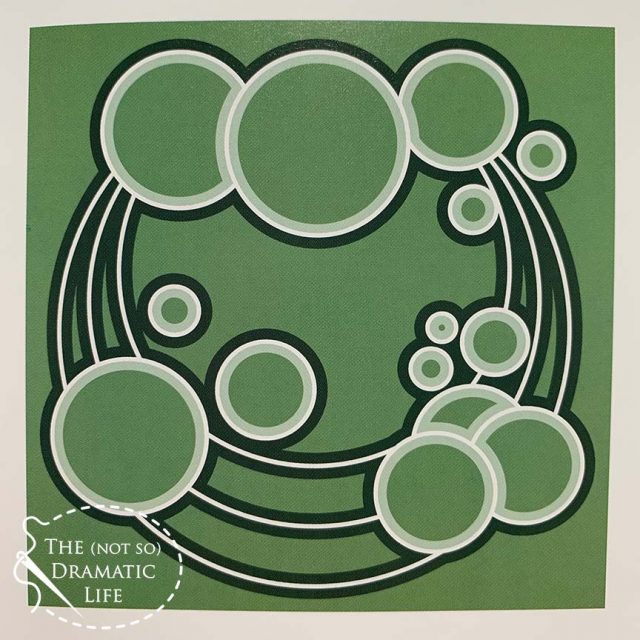 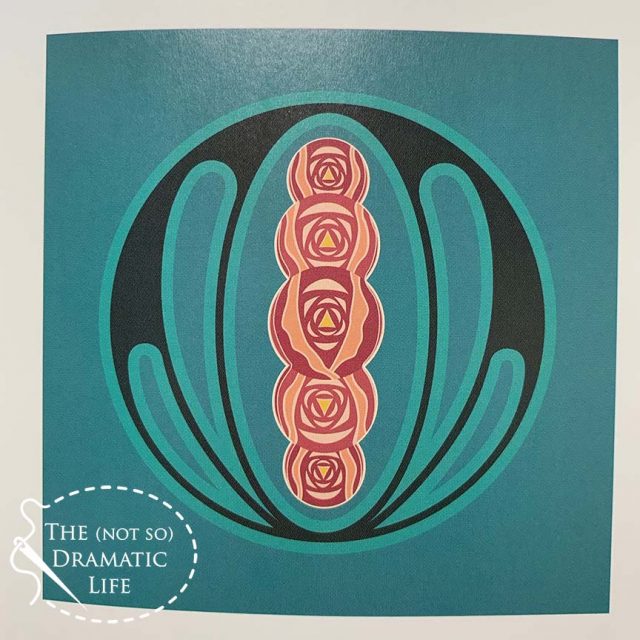 I drafted the design on AutoCad, then printed it across two sheets of tabloid size paper and glued them together to form the entire image.  Then it was time to pull out my perk wheel to use an old scenic painting technique to create a stencil.  I placed the image on top of my wool pressing mat and ran the wheel along the lines.  For the tightest curves, I used a large safety pin to poke through the paper. 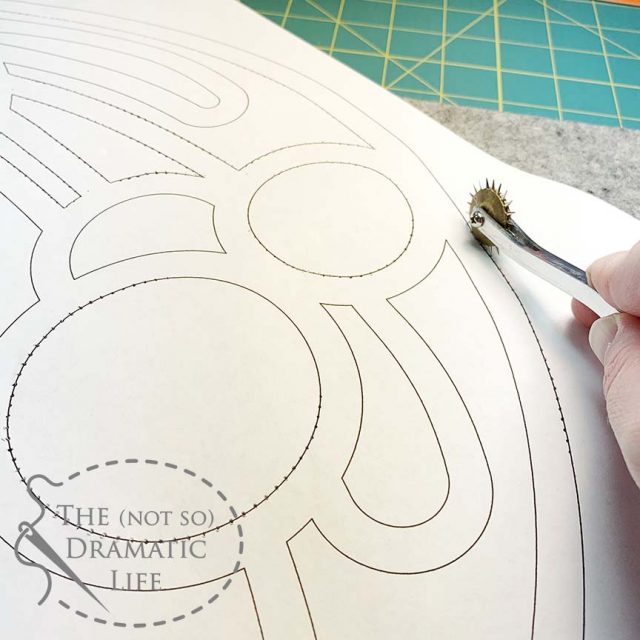 Once the holes were poked through, I flipped the paper over and used a fine tooth sandpaper to remove the bumps on the back of the template and make sure the holes were completely open. 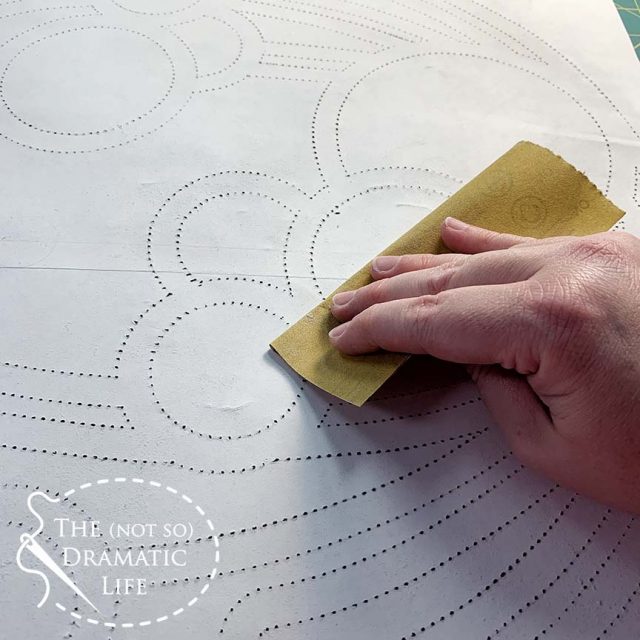 Then came the moment of truth — would it work?  I taped the fabric to the table and the stencil over it, then pulled out my chalk pounce pad.  I ran it over the stencil in small circles to keep the dust down, then carefully removed the stencil. 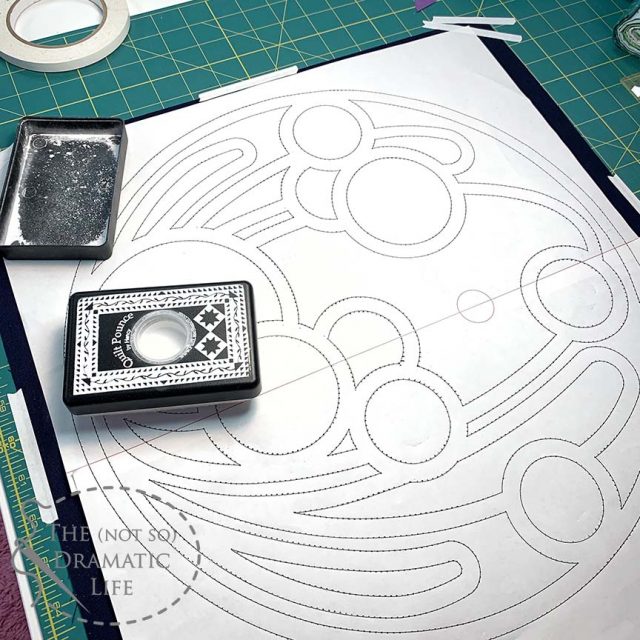 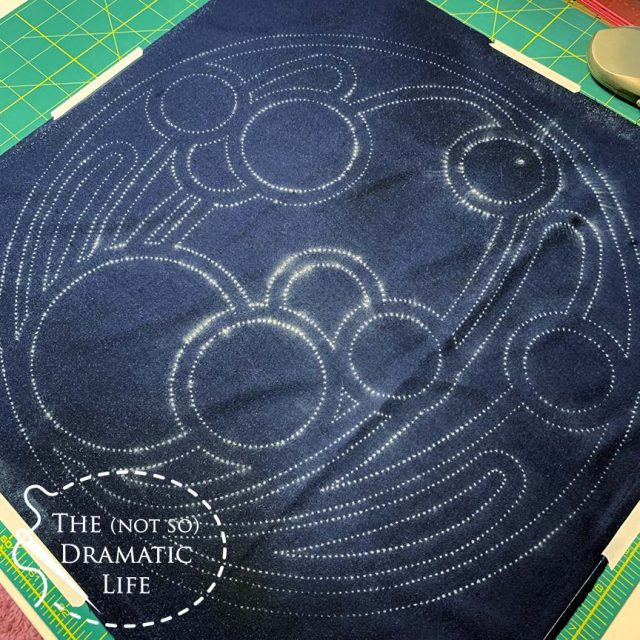 This project was the perfect time to give trapunto a try, so I started the quilting process by using batting and the top fabric with no backing.  Since I was using such a dark fabric, I selected a black batting by Hobbs.  Since the black batting doesn’t have a huge amount of loft, I used two layers for the trapunto. 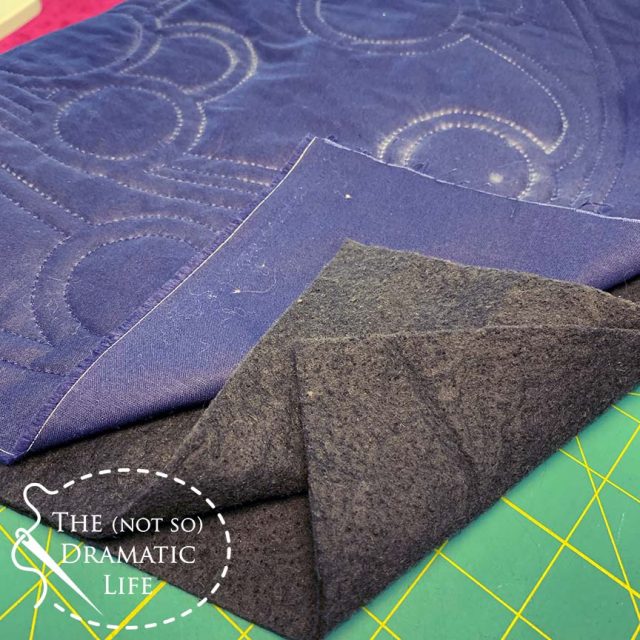 Using a walking foot on my domestic machine, I quilted all of marked lines through the top fabric and two layers of batting.  At this point I was using a 50wt Aurifil so it would be easy to quilt over using the final 12wt thread, but I’m getting ahead of myself. Here is what it looked like from the front: 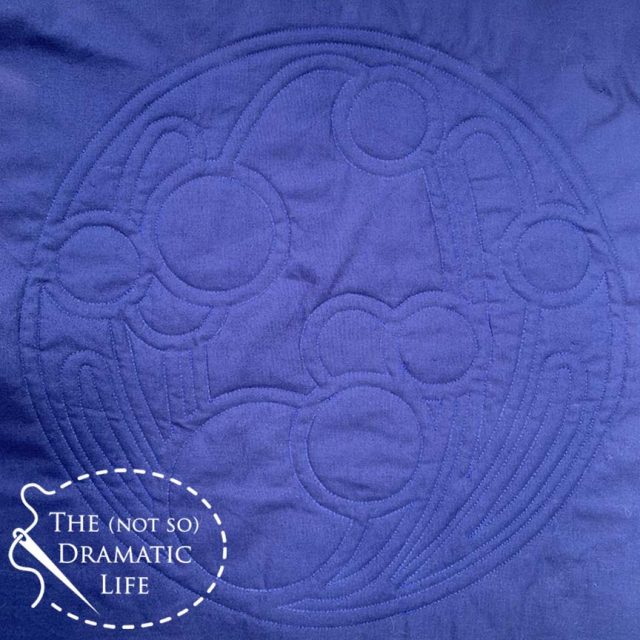 And most of the back (thanks Monty— I think he knows how hard it is to lint roll batting!): 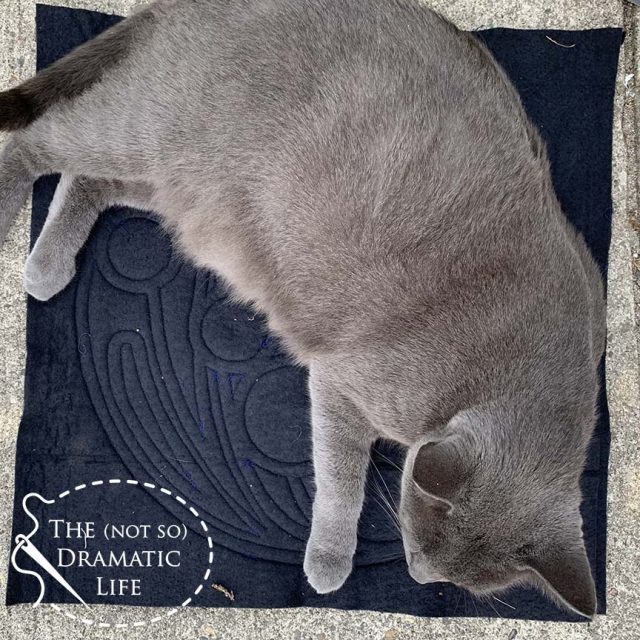 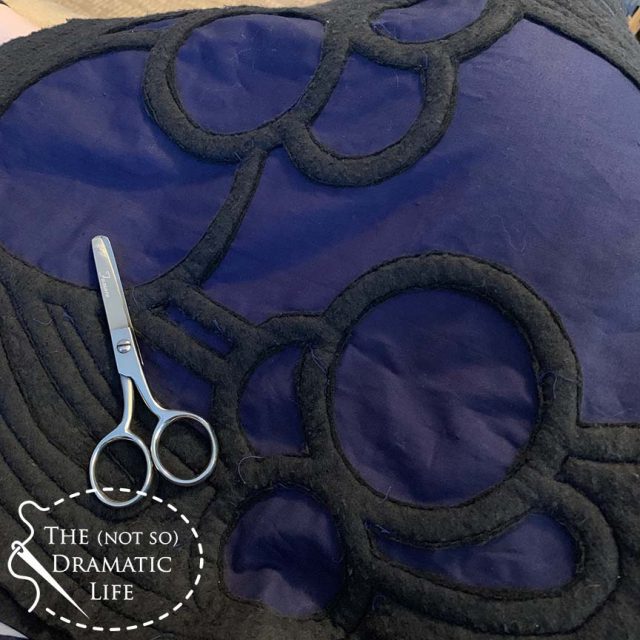 Trapunto has the best effect when the areas around it are densely quilted, so most of the quilt has dense free motion quilting.  For this part of the quilting I used 50wt thread on the longarm.  At this point in the process, there is backing fabric, one full layer of black batting, two layers of batting in the trapunto areas only (three layers total in those areas), and the quilt top.  The final quilting step was to use 12wt thread to outline each area and help that trapunto really pop! 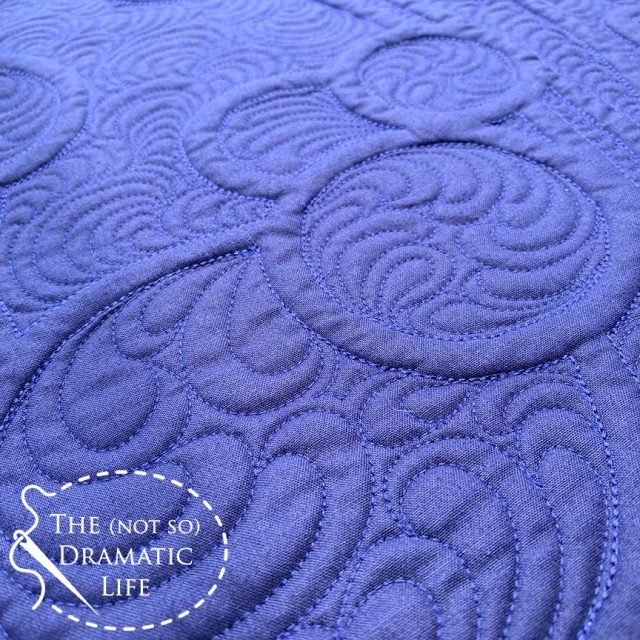 After a lot of knotting and burying of thread tails, I trimmed the mini quilt so the edge of the quilt extended 1/4″ past the outer ring of trapunto.  The edges are finished with bias binding to hug the circular edge of the quilt.  If it was more practical, I would curve all my quilt edges.  I love binding a curve! 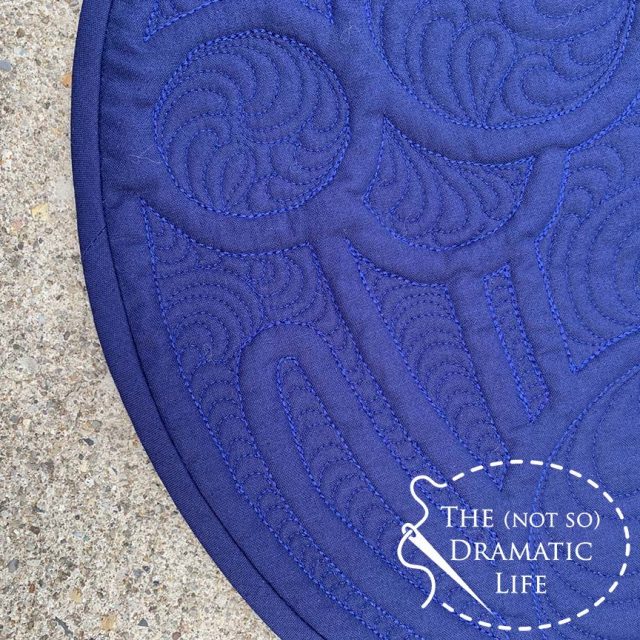 The image above shows the front of the quilt with the 12wt thread defining the areas around the trapunto.  Since I used 50wt thread in the bobbin, you can see the difference in the image below.  I think the heavier thread makes a huge difference in trapunto effect.  What do you think? 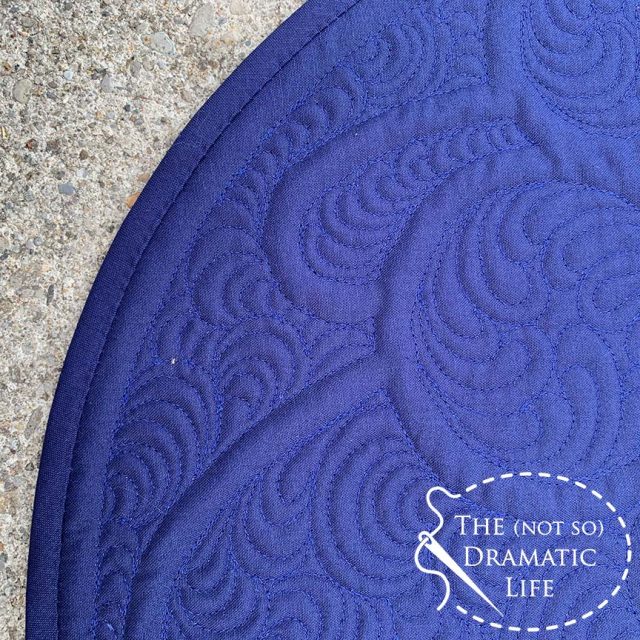 Binding:  Bias binding, machine stitched to the front, hand finished on the back 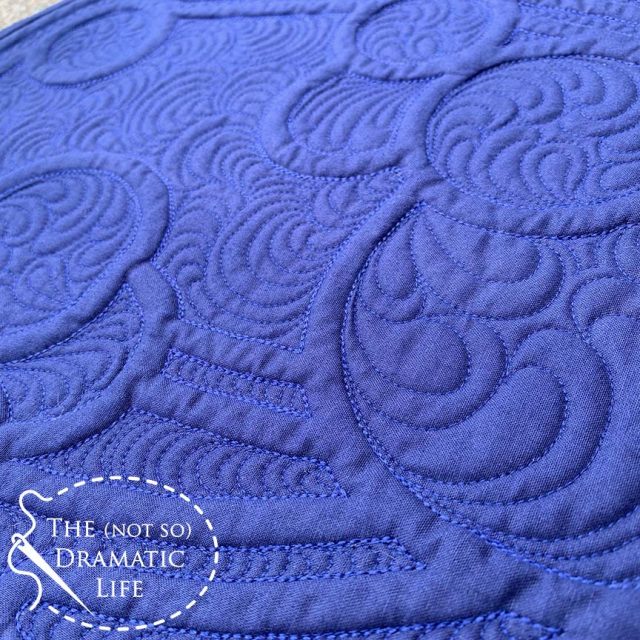 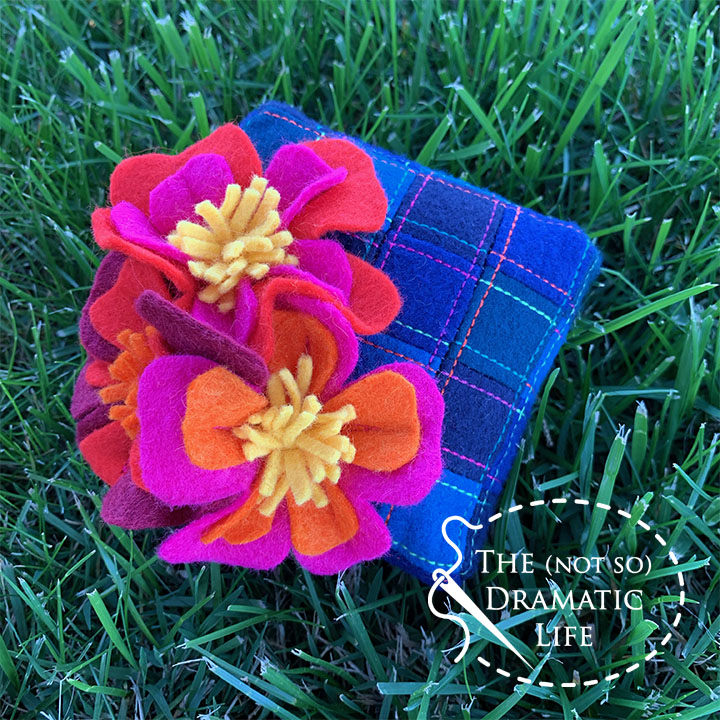 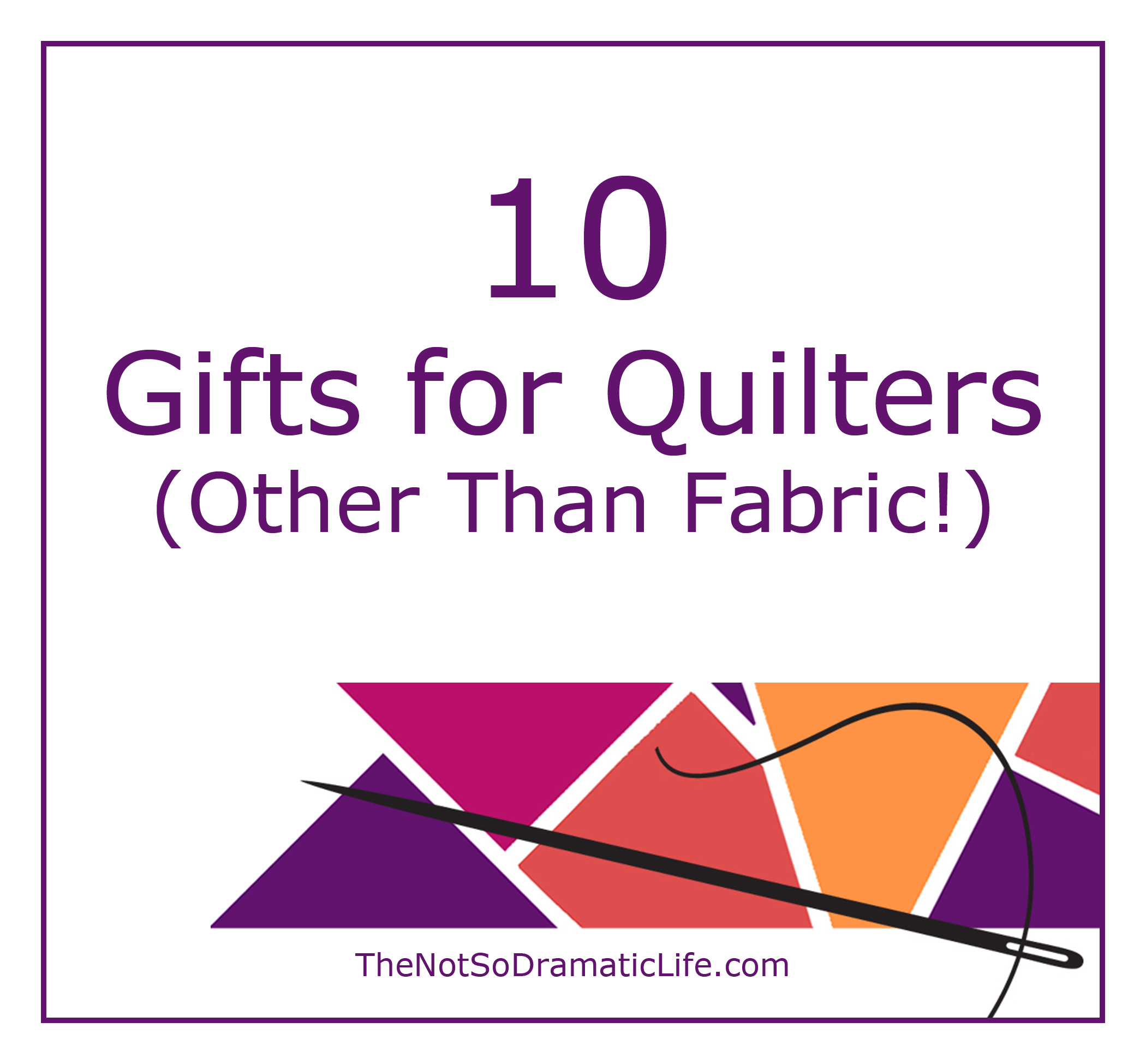 Ten Gifts for Quilters (Other Than Fabric!) 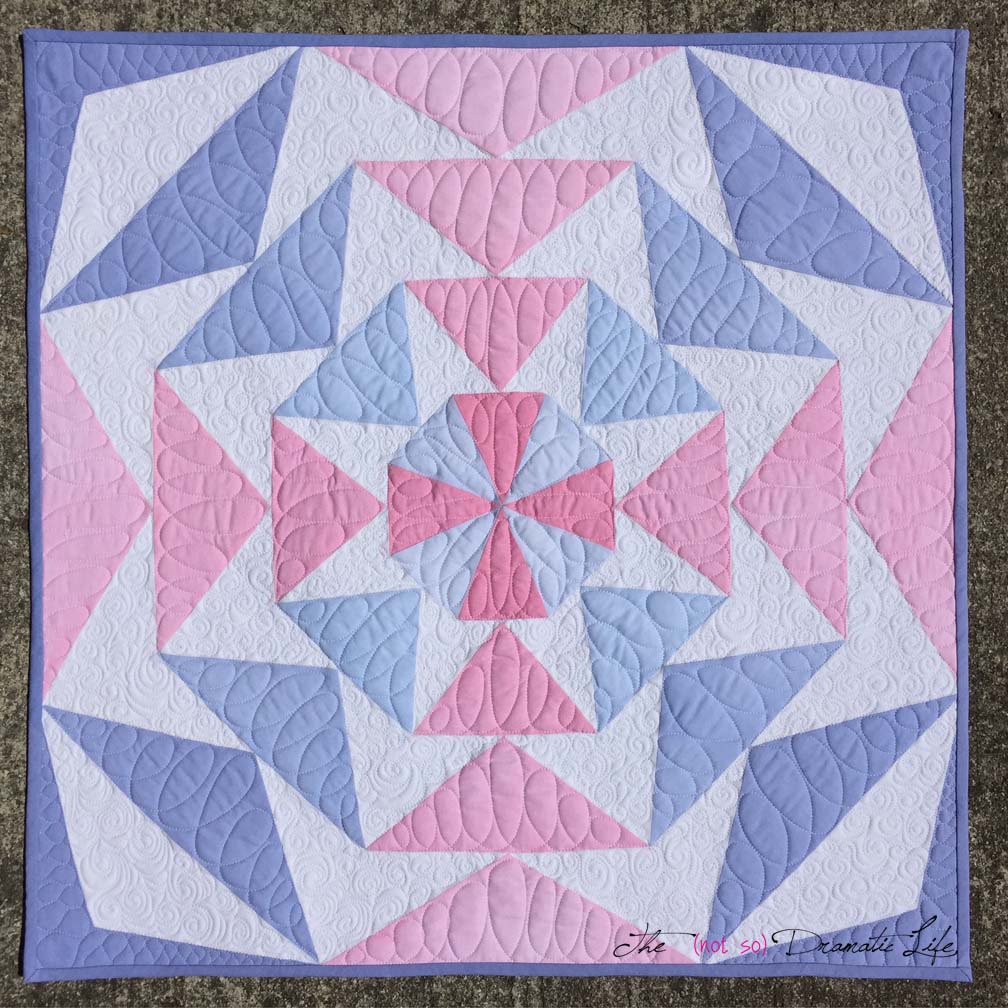 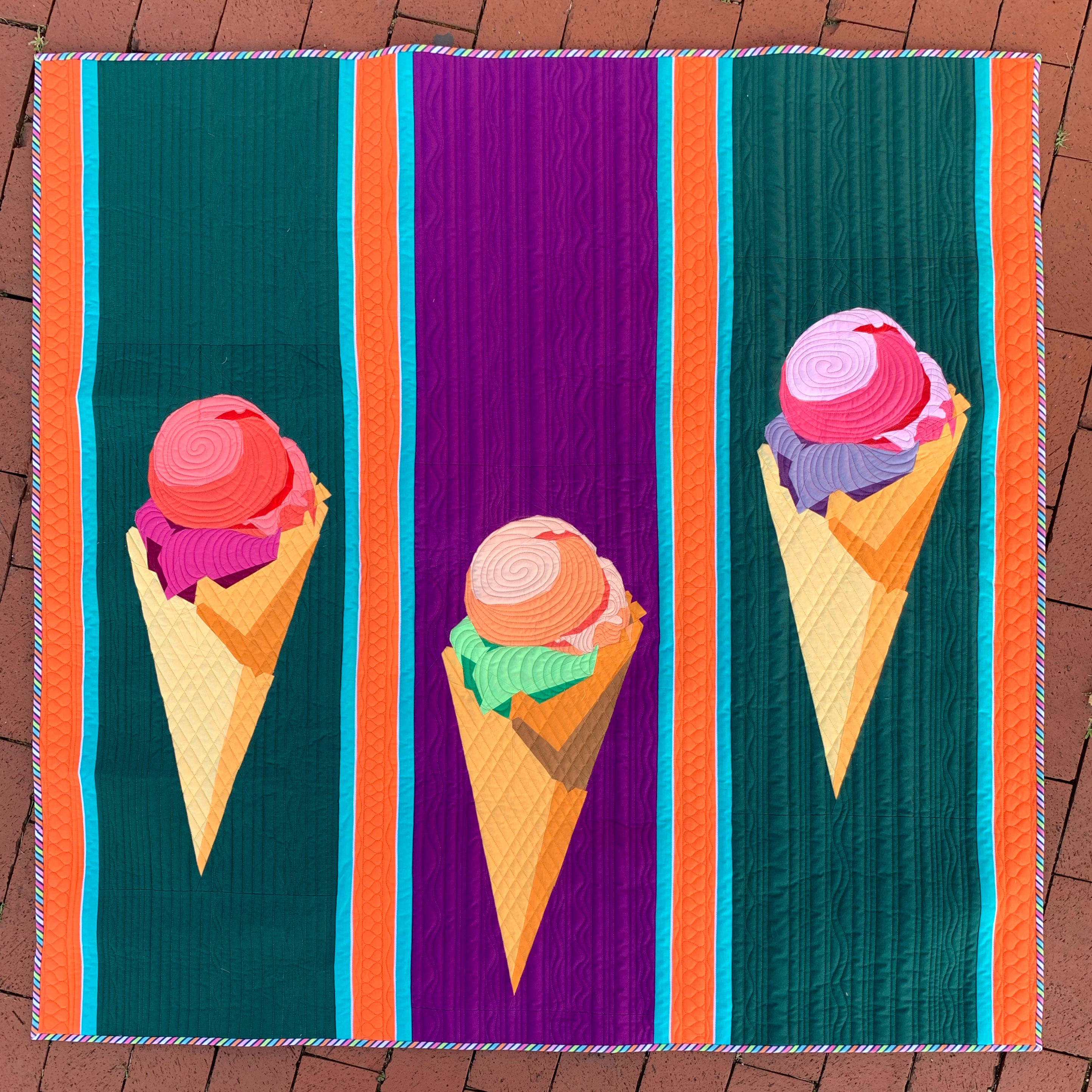 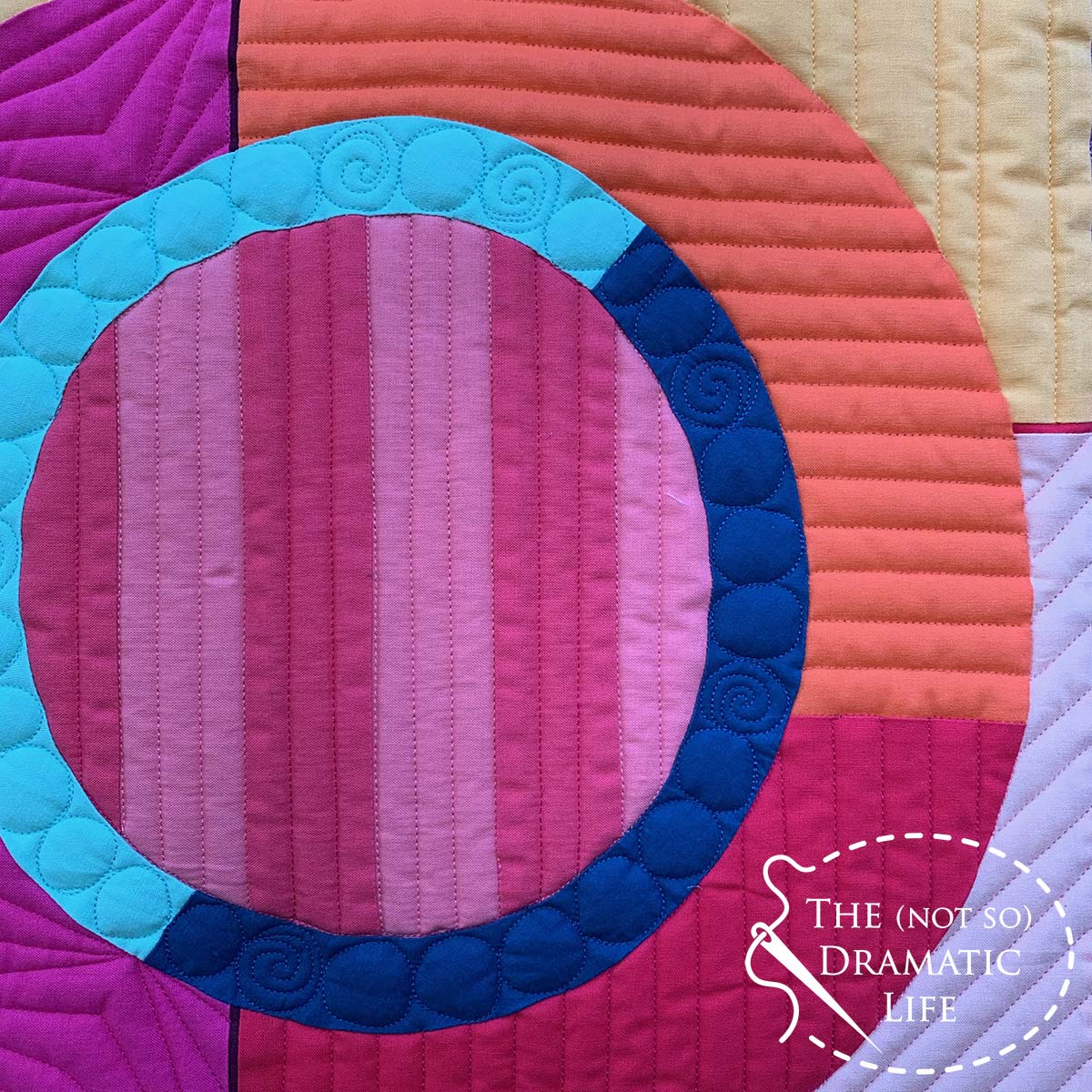